Raymond Wynne Phillips, M.D. was born in Ft. Bragg, North Carolina, and traveled throughout the United States and abroad as the son of a career Army officer. He attended Princeton University on an Army ROTC scholarship and graduated with honors in 1977. He earned his medical degree in 1981 from Washington University in St. Louis, Missouri. Dr. Phillips completed his internship and residency in Internal Medicine at Thomas Jefferson University Hospital in Philadelphia, Pennsylvania, where he was chosen to remain for an additional year as Chief Resident.

In 1985 he was assigned to the US Army Hospital at Ft. Leonard Wood, Missouri, where he served as Chief of Internal Medicine for two years prior to beginning his Gastroenterology Fellowship at Walter Reed Army Medical Center in Washington D.C. and completed his training in 1989. Dr. Phillips remained at Walter Reed as Assistant Chief of the Gastroenterology Service. He received an academic appointment at the Uniformed Services University for the Health Sciences as Assistant Professor of Medicine. Dr. Phillips has been in clinical practice in Naples from 1991 and has been participating in clinical research since 2003. In December 2021 he retired from full time clinical practice with Gastroenterology Group of Naples to focus on clinical research.

Dr. Phillips has been a member of the staff at both Naples Community Hospital and its North Collier Hospital since 1991. He was chairperson of the Department of Medicine at North Collier Hospital in 1996. Dr. Phillips is a Diplomate of the American Board of Internal Medicine and is board certified in Gastroenterology. He is a member of the American Gastroenterological Association. In 2020, he was named Physician of the Year by the Collier County Medical Society.

In 2021, Dr. Phillips retired from active practice at Gastroenterology Group of Naples in order to focus his attention on clinical research at GI Pros Research. 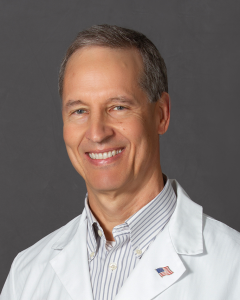